The Crum & Forster is among a list of ten Places in Peril across the state of Georgia identified by The Georgia Trust.

In recognition of these historically significant buildings, a reception will be held on October 28, 2008, 6-8 p.m. at Rhodes Hall in Atlanta. Please attend and find out how you can help save Georgia's most imperiled places.
Posted by Jim Crossley at 4:46 AM 4 comments:

At the UDC again today!

This issue was previously presented to the UDC on August 27th for nomination for Landmark Building status and was unanimously approved. However, due to a technicality, this presentation must be repeated this Wednesday, Sept. 24th. Although not critical, it would be great to have supporters in the audience.

During the former presentation the GT Foundation made it clear that they still seek the demolition permit for this elegant building and intend to focus on appealing the denial of the demo permit by the City of Atlanta. The upcoming meetings in November address these issues. Your support at these meetings will be critical.

November 21, Board of Zoning Adjustment (BZA):
GTF will present its appeal of its denied demolition permit.

November (TBD - either Nov. 6th or 13th), Zoning Review Board (ZBA):
Crum and Forster will be presented to the Board for review of Landmark Building status.

Again, thank you for your interest and continued support!
Posted by Jim Crossley at 5:04 AM 1 comment:

According to Jim Auchmutey's article on 8/27, Atlanta's Urban Design Commission voted unanimously to landmark the Crum & Forster building. But the Georgia Tech Foundation is appealing the earlier decision to reject their application for a demolition permit. That hearing will come before the Board of Zoning Adjustment on Nov 21.

There will be more meetings still, on two tracks it seems: 1) fighting the appeal of the denial of the demolition permit, and 2) going through the landmarking process with Zoning and the City Council.

Preservation is a lot of work!
Posted by Jim Crossley at 5:50 PM 1 comment:

Karen Huebner's letter to the GTF had the incorrect date for the public hearing. It's actually going to be held on Wednesday, Aug. 27 at 4 p.m. in City Council chambers.

On Friday the City of Atlanta, in the face of strong public opinion, denied the GTF's application to demolish the Crum & Forster. Further, the city will pursue landmark status for the building and nothing is allowed to be touched on it for 180 days. A public hearing is scheduled for Wednesday, August 23, 2008.

Here's the letter from the Urban Design Commission, reprinted from Maria Saporta's article:

NOTICE OF INTENT TO NOMINATE

This office has been informed that the Special Administrative Permit (SAP-08-24) for the property located at 771 Spring Street, NW, has been denied by the Bureau of Planning.

Due to its historic, cultural and architectural significance, and in accordance with the City of Atlanta’s Historic Preservation Ordinance (see enclosed), Section 16-20.005(b) of the Code of Ordinances of the City of Atlanta, this letter constitutes official Notice of Intent to Nominate the Crum & Forster Building and the real property located at 771 Spring Street, NW, Land Lot 80, in the 14th District (hereafter referred to collectively as the “property” and as shown on the enclosed map, which is incorporated herein by reference). This property is proposed for nomination to the zoning category of Landmark Building/Site (LBS). The property is currently zoned SPI-16 (sub area 1) The Zoning Committee may modify this nomination to another category as provided by Section 16-20.006(b).

You are hereby further advised that the Urban Design Commission of the City of Atlanta will hold a public hearing regarding this proposed nomination on Wednesday, August 23, 2008, beginning at 4 p.m. This hearing will be held in the Atlanta City Council Chambers, Second Floor, City Hall Complex, 55 Trinity Avenue, S.W., Atlanta, Georgia. Also enclosed is a copy of the Commission’s Rules of Procedure that will be used during the hearing. The owner(s), or his or her representative(s), will have a reasonable opportunity to present testimony and other evidence concerning the historical, cultural and architectural significance of the property, or lack thereof. The public will also be allowed a reasonable opportunity to be heard, and may present testimony or other evidence regarding the same considerations.

Please be further advised that, in accordance with Section 16-20.005.C. of the Code of Ordinances, the property herein referenced is protected and controlled by these regulations to the extent provided by that category of protection to which it has been nominated. This protection begins on the above date of this Notice of Intent to Nominate and continues for a maximum of 180 days. During this interim development control period, no alterations of any kind are permitted on this property unless the required Certificates of Appropriateness for such alterations have been secured from the Urban Design Commission of the City of Atlanta.

You are invited to carefully read the enclosed Historic Preservation Ordinance. This Notice of Intent to Nominate is the first step in the process of reviewing the property for possible nomination and designation to one of several categories of historic protection. The Urban Design Commission staff is in the process of preparing a detailed report on this property, which will be available for public review approximately ten days prior to the public hearing referenced above. After the public hearing, the Urban Design Commission will decide whether or not to nominate your property for designation to a category of historic protection. If the Commission nominates the property, the Zoning Committee of the Atlanta City Council will introduce an ordinance to designate the property to the appropriate category of historic protection. That ordinance will then go through the City’s procedure for all zoning papers, which includes another public hearing before the Zoning Review Board prior to final designation action by the Atlanta City Council.

For further information or questions concerning this matter, please contact the Urban Design Commission at 404-330-6200.

Posted by Jim Crossley at 5:52 PM No comments:

Our little building made the front page of the AJC today! Here's a link to Jim Auchmutey's story.
Posted by Jim Crossley at 4:37 PM No comments: 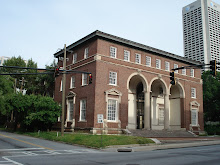